The Meramec River is one of the few undammed major river systems in Missouri stretching over 218 miles in length and having nearly 1.3 million acres of drainage. It boasts the highest biodiversity of any stream in Missouri with over 125 species of freshwater fish. While some of those flooded in the St. Louis area may disagree, the lack of a dam and free flowing nature of the river is what makes it such a treasure of the northeastern Ozarks, an area is known for rugged terrain, cold springs and beautiful streams like the Meramec.

The Red Ribbon Trout fishing area, located in Phelps and Crawford counties, begins at the Highway 8 bridge and continues downstream about 9 miles to Scott’s Ford. While the Highway 8 Bridge is the uppermost point of the Red Ribbon area, the first two miles are considered to be cool water fishery rather than cold and a much better small mouth fishery. The true trout fishery on this river begins below the confluence with the Maramec Spring branch. The effluent of the spring branch lowers the water temperature considerable and about doubles the flow of the river. The river holds MDC stocked brown and rainbows trout. The browns are stocked once or twice a year, and the rainbows are originally stocked in Maramec Spring Park and either escaped or washed out of the spring branch.  In the fall, the browns can be found moving out of the river and up into the spring branch to spawn. 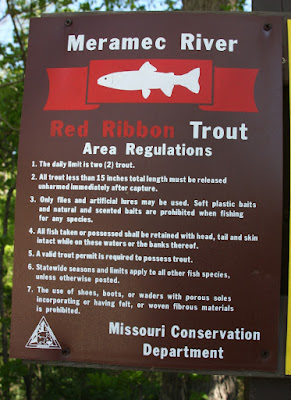 In this Red Ribbon stream only flies and artificial lures may be used. Soft plastic baits, natural or scented baits are prohibited when fishing for any species. The legal creel limit is two trout over 15 inches. To stay dry you will need a pair of chest waders, but wet wading is possible in the warmer summer months. As with all coldwater streams in Missouri, the use of porous soled shoes, boots, or waders is prohibited by MDC regulations in an effort to prevent the spread of Didymo.

On the Meramec River, brown trout and big streamers just go together and you cannot go wrong with big leeches or sculpin patterns. There is something about that big bite of food that the fish just seem to love. Hatches are neither large nor predicable on the Meramec however they do happen and it pays to have a variety of caddis and mayfly imitations on hand when they do. The trout can be a bit fickle from season to season, as water temperature and flooding seem to have a big impact.  Lack of consistency leads the crowds to often overlook the Meramec when they are choosing where to fish. That can be a mistake.


If you are a wade fisherman, there are several access points to the river, but they do involve walking. To reach the uppermost trout holding section of the river parking at Maramec Spring Park is recommended. There is a $5 daily parking fee, but the walk is flat and by following the west side of the spring branch downstream you will find a bit of solitude and wonderful water.

The next two accesses (Cardiac Hill and Suicide Hill) are a bit more katabatic in nature. To reach these access points take the Highway F/ZZ exit off of I-44 at mile marker 203. Turn right onto the south outer road to Rosati, take Highway KK south for 3 miles then turn right onto Brennan Road also know as CR3620. Follow that road for a short ways then make another left onto Besmer Road. The first parking lot you come to is “Cardiac Hill”. Just before this parking lot there is a gated MDC drive that leads to the river. The long walk down to the river is a pleasurable stroll in a beautiful Ozark valley. The walk back to your vehicle is a different matter. They don’t call it “Cardiac Hill” for nothing. A little further down, Besmer Road will dead end at a parking lot known as “Suicide Hill”. The walk to the river is much shorter, however it is considerably steeper and more treacherous. It is recommended that you keep your rod cased as you scramble up and down this slopes.

Many people fish the Meramec River from a canoe or kayak. The MDC Highway 8 access is a great place to put in and the float to Scott’s Ford makes for a perfect day fishing on the river. If you are looking for canoes, kayaks, or a livery service, Mark Dessieux at Adventure Outdoors is a great place to start. They are super nice people and you can find their office at the Scott’s Ford crossing or online at www.adventureoutdoorfloating.com.


The city of St. James is located just a few miles west of the river at the intersection of Highway 8 and Historic Route 66.  The town has three fabulous wineries, a brewpub and several great restaurants. Located along the north outer road you will find a shared venture between St. James Winery and Public House Brewing Company, called the Gardens. It is an outdoor patio which offers wine and beer products from both establishments as well as pub food and great appetizers. Downtown on Jefferson Street is a neat little wine bar called Just a Taste. They offer local, Missouri produced wines and meads as well as a full menu.  There area has a couple hotels located in town, but it you prefer a slower pace, the Painted Lady Bed and Breakfast is located along Highway 8 on the southern edge of town. And if you prefer camping, Maramec Spring Park offers both tent and RV camping from March through October.

The upper Meramec River is definitely worth a weekend get-a-way to go and spend a couple days on this beautiful northern Ozark stream. Provided you don’t mind a walk, there is a degree of solitude that is not found on other Missouri trout streams as this river is mistakenly all too often overlooked by fishermen.

Posted by Rainwater at 9:27 PM

Great BLOGS to check out